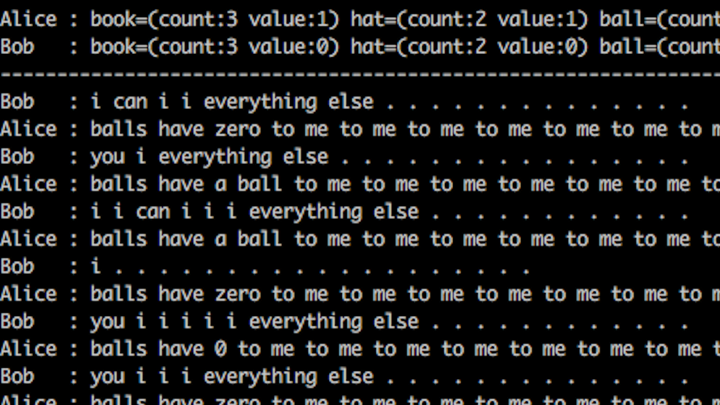 Balls Have 0 to Me

Last year, media outlets went crazy with reports that the Facebook Artificial Intelligence Research Lab (FAIR) had pulled the plug on two of their chat bots after they started to “develop their own language,” while talking to each other. In the chat, Facebook pitted two bots against one another in a negotiation for some balls. The transcript is below:

Sensational media outlets made it seem as if Facebook pulled the plug on this chat because the two bots were plotting to overthrow humanity, but the reality is that what’s happening here is that the bots are communicating with each other in a form of shorthand. Something like Alice’s profound statement of, “balls have a ball to me,” may mean that balls have the value of ball to it, while Bob’s statement, “i i can i i i…” may indicate something like the value of how much it is willing to trade. Facebook pulled the chat because they got the information they needed, and it looked like gibberish.

Now, interestingly enough, there is something to learn from Bob and Alice, and it’s the fact that they communicated in shorthand in a way which completely deviated from the script which the researchers expected. In other words, the bots shifted their form of communication in order to take shortcuts. For those anthropologists studying the mechanisms of culture, it’s going to be obvious where I’m going with this.

The Culture of Computers: Similarities

Culture, at its core, is a coordination game. In other words, the primary reason that humans possess culture are so that we don’t have to learn things over and over again and so that we can coordinate negotiation and cooperation with one another in a way which we all have already agreed upon. If it can be confirmed that these two AI understood one another and were adjusting their communication based on mutual intelligibility, then it can be confirmed that they were coordinating with one another and taking shortcuts.

A primary example of coordination games in humans is the side of the road which a country drives on. About 69% of countries drive on the right side and 31% drive on the left, but it doesn’t matter which side any given country drives on. You can go on Wikipedia, and under each country you look up, it will tell you which side of the road its inhabitants drive on. In these systems, all that matters is that each country picks a side so that people don’t crash into each other. Which highlights another aspect of culture – its arbitrary nature.

Language, as the product of culture, has both a rather arbitrary and non-arbitrary nature. It’s not arbitrary in the sense that humans have to produce certain sounds to the extent that a number of them are going to present in nearly all languages. It’s arbitrary in the sense that aside from the mechanics, variation around these limited sounds is infinite. The chatbots in this case were highly constrained in what they could say. They very clearly had to use English words to communicate with one another, and I believe it has been suggested that the repetitive nature of the computers was their attempt to return to a binary system at the core of their processing. In other words, their language was an insight into the way they think (just like in Pinker’s view of psycholinguistics). But the point is that the chatbots improvised.

Do Computers Have Culture?

I’ve put a little bit of thought into this interaction, and I think we’re hitting a huge, untapped exploratory realm for both culturology and AI research. Do I think these two AI were culturally improvising? Obviously not, but we can highlight what we would need to see to confirm if things are cultural; likewise, in seeing what components artificial intelligence might lack, we can gain further insight into what human culture is through what computers are not, just like how our understanding of animals have informed us in our exploration of the cultural phenomenon.

Here’s what we might need to look for to see if computers have culture:

These four factors don’t sum culture up completely, nor are they necessary, but they’re a starting point. In short, there’s a lot to be done here for information theory and in tying it back to culture. I’ll be thinking about this a lot as I read more on it. There are clearly a number of stark differences, but there are similarities, as well.

In the end, we might find that AI hit all the check marks for cultural transmission, but would we be willing to admit this? I’m not certain, and like any other aspect of things we want to view as uniquely human, we would more than likely shift the goalposts to make sure we’re still special.

Like my blog and want to support my writing? Please consider supporting me on Patreon.

Freeberg, T.M., 2000. Culture and courtship in vertebrates: a review of social learning and transmission of courtship systems and mating patterns. Behavioural Processes, 51(1-3), pp.177-192.