I’ve been trying to get out as much as I can while I’m in Boston since I’m only going to be here until the end of July. Today was pretty hot outside, so instead of straying too far from the nest I decided to keep things close and took a ten minute walk down to the Harvard Museum of Natural History, I also had a chance to get a meeting with Matt Cartmill.

Last week I emailed Cartmill, who is something of an idol in my mind, out of the blue asking if I might be able to drop in for a meeting. We arranged to meet last Friday at his office at Boston University and we talked for a couple of hours.

For anyone who doesn’t know who Matt Cartmill is, in 1974 he wrote a paper for Science titled, “Rethinking Primate Origins.” In the paper, Cartmill proposed an alternative theory for the origins of the Primate Order. Prior to his paper, the general view was that primates had evolved as a form of mammal specially adapted for a life in the trees. This theory, which was popularized by an eclectic naturalist named Frederic Wood Jones, had long been the general consensus in anthropology.

Cartmill thought otherwise and proposed the “Visual Predation Hypothesis” for primate origins. This new theory was based on several lines of evidence. The first was the obvious one that other arboreal mammals, such as squirrels, did not possess the same traits as primates. Notably, these traits included the replacement of claws with nails, a set of forward facing eyes, and opposable thumbs. Cartmill’s new theory, combined with the recent revelation that tree shrews were not primates (this was commonly thought until Robert Martin debunked it in 1966²), was that instead of being adapted only for life in the trees, primates were also adapted to eat bugs and other proteins.

Cartmill’s theory is still among the most widely accepted of these views, and his name is known to pretty much any student of biological anthropology. In addition to being a good anthropologist, he is an expert comparative anatomist. During our time while talking, I shared with him some ideas I have about certain primate traits and it seemed his constant emphasis was to look somewhere other than primates for the answers. At one point during our conversation he pulled a large fossil cast down from his shelf and quizzed me on it. I’m not an anatomist by any means, so this was pretty terrifying, but it seemed he was happy enough that I could guess what order it belonged to (it was a carnivore of some sort). Unfortunately I didn’t bring anything for him to sign and he told me he was heading out of town the next day, but he told me to drop in again when he gets back.

I also took a trip to the Harvard Museum of Natural History. I’ve been here for three weeks now and haven’t been to any of the museums, so I took a walk over. The museum itself is pretty modest sized and is free for people with a Harvard ID. You also get free entry into the Peabody Museum of Anthropology with your entry pass. I don’t have much to say, but I’ve taken some pictures highlighting some of their exhibits and have included captions.

Skeleton of a sperm whale. They had three different whales hanging from the ceiling.

A smilodon greets you on your way into the museum.

They have this animal labelled as a potto, a West and Central African prosimian, but the reconstruction makes it look like a closely related angwantibo. You can tell it’s still a potto based on the tail.

Highland streaked tenrec (Hemicentetes nigriceps). The highland streaked tenrec and its sister species are the only mammals known to communicate through a process known as stridulation where animals rub together two body parts to make noise, similar to crickets. In the case of these guys, they have specialized quills running along the edge of their back that make pretty loud vibrations. 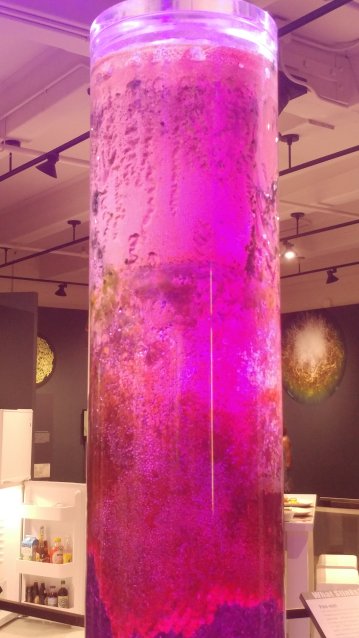 This was honestly pretty gross, to be honest. The museum had a microbe exhibit on display. What you see here are massive supercolonies of bacteria grown up and illuminated by blacklight. 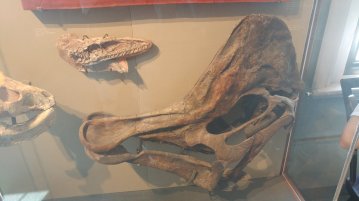 The skull of Corythosaurus casuarius. Hadrosaurs like these are my favorite dinosaurs because the crest on their heads may have been used for acoustic communication. Each species had a different shaped crest, emitting different calls at low frequencies indicating their purpose may have been for sexual selection.

The tiny pterosaur fossils were beautiful. Pamphlet shown for scale.

The giant isopod, Bathynomus giganteus. Made famous through Tumblr.

There were a number of marine invertebrates on display. I thought this one looked like a facehugger from Alien.

This tarsier was labelled as Tarsius spectrum. That used to mean any tarsier found on the island of Sulawesi. Recent taxonomic shifts would probably relabel it as Tarsius sp.

How one thing so cute could be so deadly…

The hall of birds had hundreds of beautiful specimens.

This taxidermy was eerily life-like.

A giant Kronosaurus skeleton. The centerpiece for their paleontology section 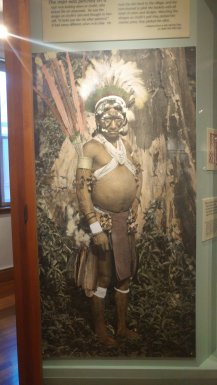 On my way into the Peabody, an exhibit on the Art of Weaponry

It was hotter today in Boston than it was in Texas…

Like my blog? Want to support me? I am an unpaid graduate student who makes nothing right now aside from my writing, so any bit helps. Please consider supporting me on Patreon.

One thought on “Rethinking Primate Origins, and a Visit to the HMNH”